My husband and I were supposed to be on an plane to Europe today. My mom worried so much about me giving birth over the Atlantic Ocean, and I told her over and over that it would be fine. The other kids were all term babies, I said. I guess the joke’s on both of us.  Instead of traveling, we spent our FriYay in the NICU with a little cray cray.

The day started off boring, weaning slowly off oxygen, but — yes, there’s always a but — the nurses decided it would be a good day for my husband to do kangaroo care. Almost immediately after getting everything situated and all of the ventilator tubes and wires taped to him, the circuit connecting the ventilator to Garrin’s breathing tube came apart, cutting the flow of oxygen to his lungs and causing him to desat. After several attempts at reconnecting the pieces, Garrin was returned to his isolette. By that point, the connector was worthless, and a nurse from down the hall ended up holding the two pieces together while our nurse and an NNP decided what to do. 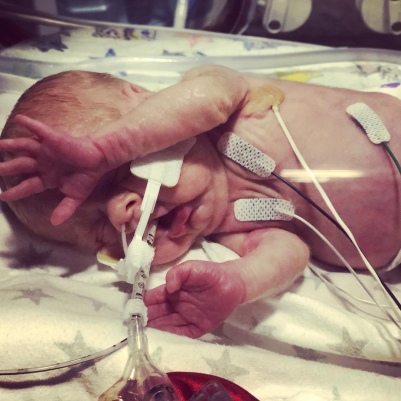 Eventually the decision was made to replace Garrin’s breating tube. Because Garrin was reintubated, X-ray had to come in to allow the health care team to verify tube placement. The nurse was not able to tuck Garrin back in as parts of his bed had to be removed for the X-ray. It seemed like it took X-ray an eternity to arrive, and by that point, more than two hours in total, Garrin was spent. His oxygen needs increased, and he had a hard time getting settled in. It was definitely not the boring day we had hoped for. Maybe tomorrow, hopefully tomorrow.

While we hope tomorrow is very boring for Garrin, it is a very special day for my hubby : It’s his birthday! Garrin’s early arrival has challenged our marriage in ways that we never expected it to be challenged, but I can honestly say that it has only brought us closer together. I cannot imagine walking through this crazy life without him by my side.

“You only need one man to love you. But him to love you free like a wildfire, crazy like the moon, always like tomorrow, sudden like an inhale and overcoming like the tides. Only one man and all of this.” ~C. JoyBell C.